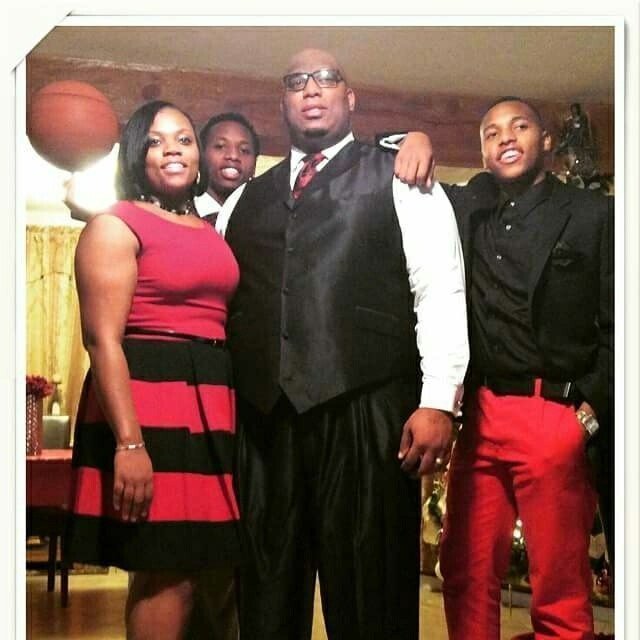 Blessings in the name of Jesus Christ.

In response to my recent viral video on CNN. I am not a Christian, neither do we serve a quote on quote white man’s religion. I love God, I serve his people and Jesus Christ is my Lord and Savior. I’m a husband of one wife Kenya from Chicago, IL and I have four wonderful, successful, educated children.

Here is the official response to the viral Charlotte video #KeithScott

Editor’s note: Below is the full transcript of the note Amere J May read in the video, along with exclusive pics.

My life has had some ups and down. Throughout my life, I’ve been given the opportunity to play basketball and its opened opportunities for me all over the world. A High School All-Conference, All-State and Honorable Mention All-American basketball player and one of the top players in the state of Michigan in the early 1990’s. Given the chance, I played college and professional basketball overseas.

With that being said, I witnessed the system and how corrupt it is. I once was on state and federal probation after serving time in BOP nearly 20 years ago.

I’ve heard and witness the many horrific stories from other brothers regarding their mandatory minimum sentences. Indicted for drug cases without any drugs being discovered. God opened my eyes to a world that I never knew existed and no-one in church seemingly wants to address it. Most of my source analysis isn’t from a book it’s from my own experiences.

I recently started a church in Charlotte, North Carolina- Abundant Faith Word Church. It’s growing fast but it’s not like most churches, you’d have to come and see for yourself. You’ll also find me hanging out at most clubs on a Saturday night parking lot praying for various individuals. Some might not agree with my “parking lot praying” and that could be a major issue.

The psychology of the church is what actually hinders the church. There’s nothing weak about serving God. What Christians, Disciples of Christ, Jehovah Witnesses, and F.O.I all have to understand people don’t hate us based upon our theology; they hate us because of our ethnicity and our culture persuasion.

For example, when a police officer pulls me over due to a traffic violation, he or she immediately racially profiles me. The officer is not stopping Pastor May… he or she is stopping a large black man.

This is one of the reason we must come together as people, regardless of our theological differences, and God experiences. Yes, it’s hunting season, the black man is obviously the prey. Denominations and creeds have divided us a people but a new nations has risen. However, it is noted that the truth has just begun to awaken many African Americans like myself to ask several questions.

For years we have been enslaved under the banner of Christianity. Christianity isn’t my issue; however, what European descendants have done in the name of Christianity is my issue. Jesus was born in the “hood” also known as the ghetto! In fact the question was asked in the bible itself “can any good thing come out of the Nazareth”?

King Herod place a hit on Jesus life, both Mary and Joseph had to relocate because Herod’s goons were going to kill Jesus. It amazes me how historians attempted to white wash this story.

When Jesus was a child, he did not go to Europe and hide; he went to Africa. How could a white baby boy hide in Africa? This is why many black people have denounced the white washing theory of Michael Angelo, painting Jesus with long hair, pale skin, and blue eyes.

The bible is clear according to Revelation 1:14-15 his head and his hairs were white like wool, as white as snow; and his eyes were as a flame of fire; 15And his feet like unto fine brass, as if they burned in a furnace; and his voice as the sound of many waters. In the 1400’s, Christianity was severely white washed.

They took known black biblical heroes and replaced pictures in the bible to make slaves believe that everyone was white in the scripture; this created a white supreme culture. They also manipulated scripture with saying “obey your masters.” The pictures were very imperative to their white washing theory because many could not read.

I would submit to you that there’s a major problem in the church. It’s time for black people to wake up! Why is it that we can’t discover 10 churches in America that has a 99.99% all white congregation, led by a black pastor? Not Jr. Pastor, Assistant Pastor but I’m referencing a Senior Pastor.

Statistics seems to suggest and I would also suggest to my reading audience that most Caucasian males do not look at another Black man as capable of teaching him, his family, or his peers anything.

Yet, blacks will fill up a White Man’s church in a heartbeat because we still have a slave mentality, it’s not right until it’s white. The blacks that attend their churches, are always in a servant capacity but you’re rarely on their administrative staff particularly on their finance team. In addition, throughout scripture God always raised up a leader for his own people.

How can you lead me if you can’t identify me? The Assembly of God was birth out in 1914 after they refused to follow a black Baptist preacher who founded the COGIC. Due to their systematic racism they allow Bishop Mason to ordain them but they wouldn’t publicly follow him as a black man! No, all white people are not devils but history records that many of them are.

It’s not until the descendants of the White Supremacist within the church repent that we can see a difference. Have major Caucasian leaders ever given a public address regarding the murders of black men by the hands of police officers?

No, I don’t expect them to because they are a part of the system that oppresses our people. We are the lost tribe of Judah, etymologically Judah means praise. Many Pastor have stolen the sound of the black church. They employ our musicians, singers, and ministers while we grow their churches. Meanwhile the church in the hood suffers- psychologically and financially.

Let the Exodus begin… The problem we face today is the Willie Lynch Syndrome has oppressed us as a people, in and out of the church world. When Dr. Martin Luther King Jr. marched, we were one community. Now there’s three types of Negro’s: the haves, the have nots, and the in-between. Consequently we have lost our voice as black clergy.

The Civil Rights movement started from the black pulpit. We have black leaders raising money for a Jet when we have children in the churches community starving. Yes, we are divided three ways. Why can’t all of the N.F.L African-American Athlete’s take a knee showing their support to black lives matter and the lives that were taken?

Chances are, their sons or daughters are a part of an elite group and they will never experience the racial disparities that the normal kid in the hood would experience. The question I asked myself, what would Muhammad Ali do? We can’t be insane.

We can’t asked those for help from those that have oppressed us for over 400 years. Think about it, if every NBA player refuses to play this year until those police officers that murdered our black men were arrested and prosecuted these police shooting would stop. What if one million of our men and women would save their $70 from getting a pedicure and manicure during the next two months, donate the money to HBCU or an inner city programs.

That would be $140 Million dollars within two months. Stop asking for hand-outs, the power is in our hands! The NBA or the NFL would be nothing without our African American athletes but how many African-American owners in these institutions?

Over four-thousand people gunned down in Chicago during President Obama’s tenure. Did they receive condolences or a phone call from the White House? However a gay NBA player comes out the closet and the White House celebrates his courage. What, is this a sick joke?

What about the courage of strong black single mothers in the inner city or our successful men who educate themselves without a father in the home. A rise of a new nation has begun.

Lastly racism in Hollywood exist as well after all of the motion pictures that Denzel Washington played why would he only get an Oscar performance for playing a drug dealer? Throughout history many Caucasians have gone throughout this earth killing, stealing, and destroying. Yet, they put our young people out on the media rioting, call them animals as if they have no cause to be angry.

Historically-why don’t we acknowledge this as evil…A devil who opens a door for you is not being courteous, yet you say thank you after its deed. No more praises to “good” acts, we must ONLY praise well itself. At this junction, I feel that no black leader will receive full respect from white leaders; neither are we asking for it.

It’s critical to know that the KKK yet flourishes, while the Black Panthers are dead or in imprisoned for even hinting at supremacy! The Presidential Nominee Donald Trumps has offended everyone but when he makes vulgar statements against a white woman now the Republican Party wants to denounce him, what hypocrisy.

We can no longer be silent, rise up people! In closing, as an African American leader my message is first to my family, the black community, and the world. My goal is not to own a jet, a mansion, nor to become a billionaire. God has raised me up for this present new generation of black men and women.

It may sound offensive, but God didn’t raise Moses up for any other people but his own. Use your voice it will make a difference. I’m located in Charlotte, North Carolina… I have a vision for today’s youth called a S.O.U.L Trained. It would be greatly appreciated if you partnered with us to make a difference.

The vision of S.O.U.L Trained is as follows; train and educated young black men and women. We do this through our commitment to creating a strong empowered black community through economic sustainability and freedom.

Wake up we’ve been sleeping to long, Choice Blessings.

You can reach me at [email protected] or write us at: