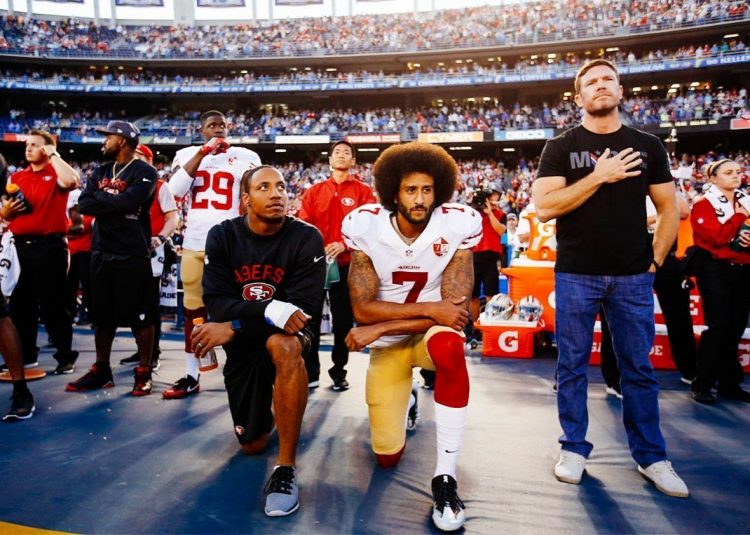 An Open Letter to Roger Goodell and the 32 NFL Owners

To Roger Goodell & the 32 NFL Owners:

We think you may have heard now that your opening day game hit its lowest rating since 2009. Although there are a number of factors that contribute to this, the one factor you can not deny is the boycott of your league because Colin Kaepernick isn’t signed.

Now we don’t think all of you owners aren’t considering signing this man, but for the 1 or 2 (or more) who are considering it, you probably are scared of the “backlash” and what will happen to your “bottom line”.

Don’t worry. We think we may know what will take place:

Now why is this? Because in the end those who are upset aren’t going to let “little ‘ol” Kaepernick take them away from the joy of watching their favorite team / sport. The truth is that the people who Kaepernick stood for are far more affected than the people who are angry at him for his “disrespect”. That’s just the way it is.

So you don’t believe us Mr. Goodell and the 32 Owners? Need quick historical context?

Well, look at the story of James Meredith, the 1st black man to attend Ole Miss in 1962. A major riot broke out in protest. People died. Guess what happened in the end? Meredith got accepted, and eventually business went back as usual.

Or you can look at the 1974 Boston Busing Crisis. White people did not want Blacks to attend their schools in “southie”. Rocks were being thrown on school buses. Fights broke out.

Guess what happened in the end? Although 1/3 of white parents pulled their kids out of the integrated schools, everything worked out in the end and Black kids in Boston (who did not have great education until then) were able to catch up.

Those are just a few examples out of many.

So for the owners who are thinking about signing Colin Kaepernick, you will be making a great move. All that backlash you are scared of…oh they will come. Then they will eventually go away, and all this “noise” you’ve been aggravated about over the past year will largely go away as well.

One more thing: Colin Kaepernick does not have to beg to get his NFL job back! His overall stats should speak for itself, especially over the current QB’s signed to these teams. You KNOW Kaepernick is better than some of these guys.

Stop playing around and do the right thing. And stop denying it.

It doesn’t make sense that those who challenge society’s ways (especially when it comes to their own people) have to consistently pay the financial price for trying to make the world a better place.

The UNSTRIPPED VOICE Team
(the ones who created the change.org petition with over 177,000 signatures as of this writing)

Yes indeed. Also whoever signs him signs me as their newest fan

Yes i think they get the message, but these owners are the sons and grandsons of slave owners thisnis nothing new to them they’re just doing what they been taught, keep up the good work and hit them in the pocket book thats what they understand. They care nothing about human rights their god is them died presidents.If they loose enough that green paper minds will change.